ONE TASTE TOO MANY is the first book in the brand new Sarah Blair Mystery series by Debra H. Goldstein. Protagonist, Sarah Blair, gets pulled into investigating her nasty ex-husband’s murder when her twin sister, Emily, becomes the number one suspect. As Sarah starts asking questions, she finds that her ex-husband’s girlfriend, Jane, seems to have her finger in a lot of things… including claiming ownership of Sarah’s cat, Rah-Rah. I loved Sarah’s sweet relationship with Rah-Rah and her ongoing conversation with the Siamese. It shows additional insight into Sarah’s personality. I was intrigued with the author placing the setting and several scenes at a Food Expo, where Emily, as a talented sous-chef, has to both demonstrate how to prepare dishes and participate in a competition. Sarah, on the other hand, is not a cook… at all. Entertainment is provided when Sarah has to step in for Emily and provide a food demonstration, despite her lack of cooking abilities. It highlights their close relationship with each other and I enjoyed how they support each other no matter what.

The author weaves several subplots into the central murder mystery, providing lots of twists and turns with many suspects. I had a bit of trouble following how it all interrelated at times but in the end, the threads wrapped up together in a satisfying conclusion. There are also lots of characters introduced in this first book but I think it could be providing set up for future installments. Overall ONE TASTE TO MANY is a good start to a new series. I look forward to seeing what mysteries find Sarah and Rah-Rah in future installments.

Since Sarah isn’t a cook at all, when she’s put in the spotlight to demonstrate a dish at the Food Expo, she turns to a convenience product standby and creates Jell-O in a Can. This classic recipe from the 1950’s was a hit with the less-than-adept cooks attending her demonstration. I’ll admit I haven’t prepared Jell-O in years but found that my granddaughter was enthralled with it. From the sweet, jiggling treat to the juicy pineapple… is it a dessert or a salad? We finally decided it’s good for both! I garnished with maraschino cherries for a festive look, but you can always add them (or any other fruit) to the can before you pour in the liquid Jell-O. Either way, sometimes it’s fun to revisit classic, old-time recipes! 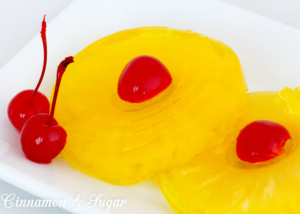 For culinary challenged Sarah Blair, there’s only one thing scarier than cooking from scratch—murder!

Married at eighteen, divorced at twenty‑eight, Sarah Blair reluctantly swaps her luxury lifestyle for a cramped studio apartment and a law firm receptionist job in the tired hometown she never left. With nothing much to show for the last decade but her feisty Siamese cat, RahRah, and some clumsy domestic skills, she’s the polar opposite of her bubbly twin, Emily—an ambitious chef determined to take her culinary ambitions to the top at a local gourmet restaurant . . .

Sarah knew starting over would be messy. But things fall apart completely when her ex drops dead, seemingly poisoned by Emily’s award-winning rhubarb crisp. Now, with RahRah wanted by the woman who broke up her marriage and Emily wanted by the police for murder, Sarah needs to figure out the right recipe to crack the case before time runs out. Unfortunately, for a gal whose idea of good china is floral paper plates, catching the real killer and living to tell about it could mean facing a fate worse than death—being in the kitchen!

A special thanks to Deborah H. Goldstein for providing THREE copies of ONE TASTE TOO MANY for three lucky winners! Contest ends December 16, 2018 at 11:59 pm and is limited to U.S. residents. Please use the Rafflecopter box located below the recipe to enter. The contest is administered by Great Escapes Virtual Book Tours and the winner will be announced on this page as well as notified by email (so check your spam folder!) 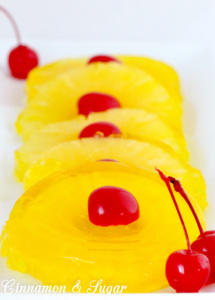 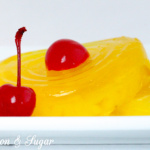 Print
Jell-O in a Can

In the 1950's, Jell-O and Dole Pineapple joined forces to create the Jell-O in the Pineapple Can recipe. 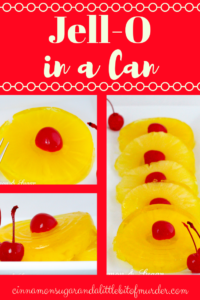 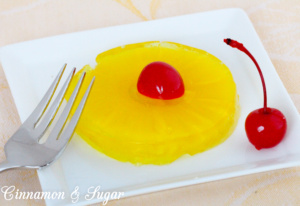