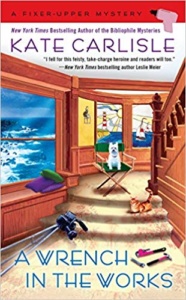 A WRENCH IN THE WORKS, the sixth book in the Fixer-Upper Mysteries by Kate Carlisle, is an entertaining addition to a delightful series! Protagonist Shannon Hammer’s sister, Chloe, is the co-star of Make-Over Madness on the Home Builders Network. Chloe has brought the show to Lighthouse Cove for a feature on Victorian houses (something Lighthouse Cove is famous for) and has talked Shannon into being on the program renovating a decrepit home. I loved the “behind-the-scenes” tricks on the do-it-yourself home renovation television show and the author has cleverly woven her plot into the filming of the segments. The reader is also introduced to words and techniques used to restore the historical homes. I enjoyed learning about the various tools, Victorian styles, and repairs that are used without it detracting from the story.

The book has everything you might think a reality tv program might have from a tyrannical producer to jealousy over stardom to flirtations to comradery between the staff. When the producer is found murdered, Chloe is immediately a suspect since she had been fired and was heard loudly arguing with the victim. Shannon wants to help but finds her sister has been harboring a long-time secret. It doesn’t help that Chloe had been on the wrong side of the law in her youth and has a strong mistrust of authority. Ms. Carlisle weaves in family relationships and I loved seeing Shannon and her sister learn to overcome the past and the secrets that kept them apart. This subplot adds an emotional depth to the story. There are enough suspects to keep it interesting and the pace of the plot moves quickly, keeping the storyline flowing. I had a hard time putting the book down when it was time to tend to other responsibilities and I found myself trying to find time to squeeze in ‘just one more chapter’. I am counting down the days until the next installment in the Fixer-Upper Mystery series!

While this book doesn’t have recipes, Emily, the town’s caterer, provides many yummy treats for the television crew to munch on during the shoots. One of the goodies Emily provides is Cream-Filled Maple Bars. Shannon almost swoons from the ‘intoxicating blend of luscious creamy custard, fluffy doughy wonderfulness, and maple sugared yumminess!’ So I set about to develop my own recipe that would make Shannon and Emily proud to serve. While these are quite a bit of work, the results are oh so yummy! Sweet yeast dough is deep-fried until golden brown and then filled with a creamy vanilla filling. Pure maple syrup brings loads of flavor to the thick icing for the finishing touch. Whether you like coffee, tea, or a big glass of ice cold milk, these Cream-filled Maple Bars will make breakfast or break time delicious! 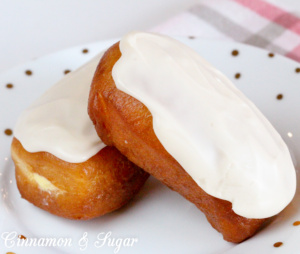 Contractor Shannon Hammer has to dig through murder suspects in the latest Fixer-Upper Mystery from the New York Times bestselling author of Eaves of Destruction and Once Upon a Spine.

Shannon Hammer’s younger sister Chloe left Lighthouse Cove after high school to make it big in Hollywood. And she did it! For several years now, Chloe has been the co-host of a popular home repair show on the Do-It-Yourself Network. Now, after ten years, Chloe returns to Lighthouse Cove with her crew and co-host to film several shows featuring her sister Shannon, along with some special mini-segments on Victorian style and design.

But Shannon realizes quickly that things are not exactly blissful in TV land. Her sister’s handsome co-host is being stalked by someone who turns out to be his estranged wife, Erica–who also happens to be the executive producer of the show. Erica’s got a knack for stirring up sticky situations and when she’s found dead, Chloe and the entire crew are under suspicion.

Shannon soon discovers the real reason why Chloe was so eager to move away from Lighthouse Cove all those years ago. Can Shannon figure out if that ten-year-old secret is connected to Erica’s death? And can she track down the real killer before her beloved sister becomes the next victim? 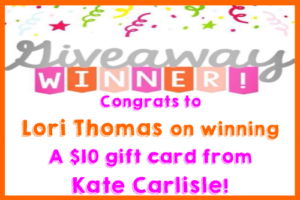 A special thanks to Kate Carlisle for providing a $10 bookstore gift card! Winner will receive a $10 gift card to the bookstore of their choice, as long as the gift card can be purchased online. Use it to buy A Wrench in the Works or, if you’ve already read it by then (hint, hint), you can use it to buy your next great read! Contest ends Wednesday, November 14, 2018 at 11:59 pm PST. Please use the Rafflecopter box located below to enter. The winner will be announced on this page and on Cinnamon & Sugar’s Facebook page, as well as notified by email (so check your spam folder!) 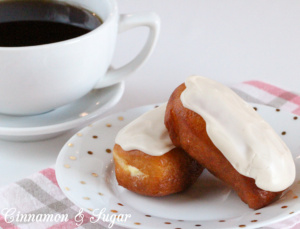 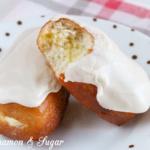 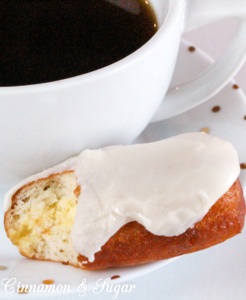 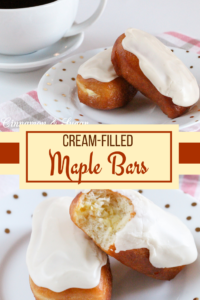 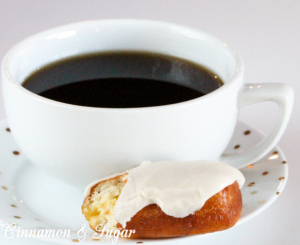