I’m very happy to be a part of the Great Escapes Virtual Book Tour with READ TO DEATH by Terrie Farley Moran! While this is the third book in her Read Em and Eat Mystery series, it is the first one I’ve had the chance to read. It is easily read as a stand-alone and it didn’t take me long to get to know the characters and enjoy their adventure as they solve another crime! 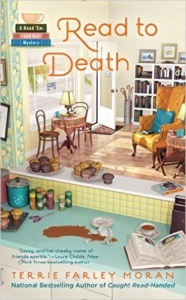 Sassy Cabot owns Read ‘Em and Eat Cafe and Book Corner with her best friend, Bridgy Mayfield, in Fort Myers Beach, Florida. It’s nearing the end of “snow bird” season so the two women put together the last book club tour for the seniors, visiting Thomas Edison and Henry Ford’s winter estates. They hired talkative, know-it-all, although good-hearted Oscar Frieland as the van driver who ends up in an argument with one of the senior ladies in the group.

After the tour the ladies scatter to get ready for their book club meeting and Bridgy returns to the van to retrieve her sunglasses. She finds Oscar dead, stabbed to death with scissors. With the shock of finding the body, Bridgy is overheard saying things that could be construed as admission of guilt. With the police focusing on Bridgy instead of finding the real killer, Sassy knows she needs to start asking questions instead of staying out of the investigation as Lieutenant Frank Anthony (aka Lieutenant Judgmental) demands. When Bridgy and Sassy’s mothers show up, Sassy finds she has a lot to juggle. Can she keep her Cafe going, keep the mothers happy, and find the killer before they fly out of town? Or will her best friend and business partner spend the rest of her life in jail?

READ TO DEATH is a fun, lighthearted read that is character driven. The senior citizen group has some quirky characters, such as Bridgy’s Aunt Ophie. There is tension and mystery surrounding the fallout Aunt Ophie had with Bridgy’s mother and the subplot weaves nicely with the story   Sassy’s mother, who calls herself Sage at the moment, has a free spirit keeping everyone on their toes and provides some humor. I also enjoyed the historical facts woven into this cozy mystery. I had no idea that both Edison and Ford wintered in Florida! I missed Oscar after he was murdered because he was a great tour guide providing all sorts of insight into the history of the area.

The author cleverly provides funny nicknames for so many things such as Sassy’s Heap-A-Jeep. She has also creatively named the food items sold in the cafe to correspond with books, such as Old Man and the Sea Chowder and My Secret Garden Salad.  In addition to a cute culinary cozy, Terrie also includes a couple recipes with her book. The one that I was instantly drawn to, Drunken Raisin Scones, was provided to Terrie by Karen Owen, blogger at A Cup of Tea and a Cozy Mystery. They have graciously allowed me to share the recipe with you…and oh my, these are amazingly flavorful scones! Plump raisins are simmered in a whiskey and cinnamon sauce that infuses the flaky, tender pastry. Additional whiskey and cinnamon reduction is used in the glaze to add another layer of flavor that will have you asking for seconds! Thank you, Terrie and Karen, for allowing me to share such a scrumptious recipe!

A special thank you to Terrie Farley Moran for providing two giveaway copies of READ TO DEATH and given away by the Great Escapes Virtual Book Tour. Please enter via the Rafflecopter located below the recipe. 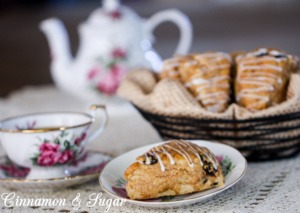 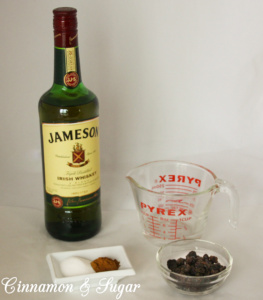 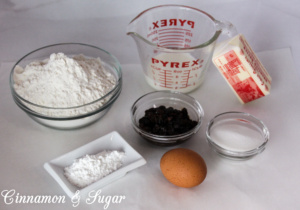 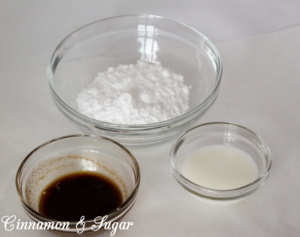 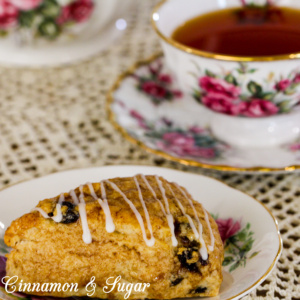 Stir and bring to a boil, then simmer until the liquid is reduced by half.

Remove from heat and set aside 2 tablespoons of the reduction liquid for the glaze.

Set aside the raisins and the remaining reduction liquid for the scones.

Sift flour, sugar, and baking powder in a bowl.

Cut butter in small pieces and blend into the flour mixture until it resembles bread crumbs.

Whisk the egg and milk together then hand stir mixture into the flour mixture.

Add raisins and liquid reduction to scone batter and mix.

If dough is too wet, add a small amount of flour.

On a cutting board, shape dough into a mound.

Cut into eight triangles and place on a cookie sheet without pieces touching.

Bake until the edges are golden brown, approximately 15 – 17 minutes.

Remove from oven and let cool slightly before glazing.

Stir in the reduction liquid and milk.

If glaze is too thick, thin to taste with a few drops of water.

Mix powdered sugar and milk together until smooth.

If you’d rather not use whiskey, substitute apple juice. 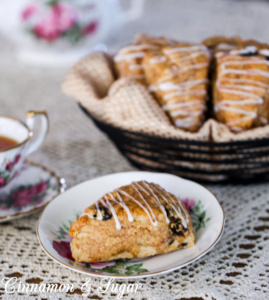 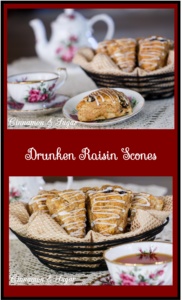 I have been a fan of the books written by Elizabeth Buzzelli (aka Elizabeth Lee) for some time. When she told me she was writing a new series and asked if I would be an early reader for A MOST CURIOUS MURDER: A Little Library Mystery, I jumped at the chance! Even though the book does not have recipes, Elizabeth created a special dessert, Topsy-Turvy Pineapple Torte, to celebrate the Alice in Wonderland theme of the book. The torte is a meringue-based cake, baked in a cast iron skillet which creates crispy edges. Brown sugar mixed with butter, crushed pineapple, and maraschino cherries provides an easy base to support the cake while baking. But when it’s turned upside down for serving, that’s when the magic happens. The sugar caramelizes with the pineapple, creating a rich contrast to the light cake. Even though my husband shouldn’t eat dairy, he couldn’t stop eating this delightful dessert and declared it was one of the best he’s ever had! Elizabeth has also included a yummy optional rum sauce to drizzle over the cake. While not necessary to use, it does add an additional level of decadence!

Jenny Westson has returned home to Bear Falls, Michigan after a bitter divorce and the loss of her job and friends. When she pulls up to her mother’s house in the early morning hour, she finds her mother’s Little Library broken into smithereens with the books destroyed. Sick at heart, her deceased father had built the Little Library as an anniversary gift just months before he was killed in a hit and run accident, Jenny tries to clean up the mess before her mother sees it. 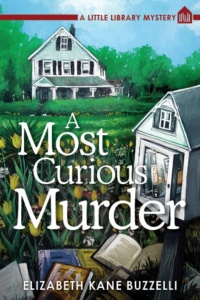 She’s interrupted by her mom’s “little person” neighbor, Zoe Zola, who loves to quote Lewis Carroll. With her exhaustion and emotional heartache, Jenny doesn’t care for Zoe all that much, but despite her attitude, Zoe pitches in to clean up and help break the news to Jenny’s mom, Dora. When the police tell them it’s probably just a hit and run, Zoe points out all the evidence which indicated it was something much more malicious. She thinks it could be one of their neighbors, Adam Cane, who destroyed the Little Library since he hated it and her dog, Fida. When Fida disappears Zoe points the police in the direction of Adam again, but when he turns up dead in Zoe’s fairy garden, she’s suddenly suspected of murder.

Evidence is even more incriminating when Adam’s brother, Aaron, is found murdered with Zoe’s dog locked in his impoverished cabin. Jenny knows Zoe is innocent, despite her quirks, and decides she has to find the real killer before the small-town police railroad Zoe right into prison. With the madness of murders going on around her, Jenny must find the answers that they and the killer are looking for but time may be running out for another innocent victim.

I enjoy reading cozy mysteries for a variety of reasons: good character development, happy endings, and of course they are a source of wonderful entertainment. A MOST CURIOUS MURDER fits my criteria for what makes a book good, but then the author went a step further and made it great! This first book in her brand new series has a strong plot with plenty of twists, turns, and falls into the rabbit hole which kept me up late at night turning pages. But what made this book stand out in my mind is the intertwining of emotions in the subplots that pulled me in, made me relate, and made me think about the story and the characters long after I had finished the book. Ms. Buzzelli has a lyrical cadence to her writing which fit the theme of Lewis Carroll’s Alice In Wonderland and enhanced the settings so I felt like I was experiencing the book instead of just reading a story.

One of the quotes Zoe shares with Jenny that I thought was quite appropriate for my review is “….words and words and words – until the words sort themselves out and everything is clear, or it becomes completely unclear and it doesn’t matter anymore.” Elizabeth Kane Buzzelli’s words are perfectly clear and come together to make a delightful, thought provoking read. Well done! 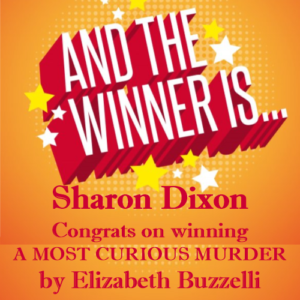 A very special thank you to Elizabeth Kane Buzzelli for providing an autographed hardcover of A MOST CURIOUS MURDER! (U.S. residents only.) Please use the Rafflecopter box located below the recipe to enter. Contest ends Monday, July 11, 2016 at 11:59 pm PST. Winners will be announced on this page and on Cinnamon & Sugar’s Facebook page, as well as notified by email (so check your spam folder!) 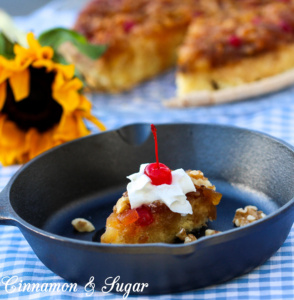 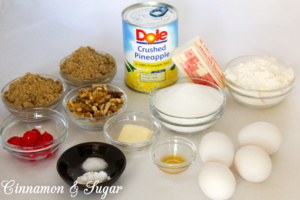 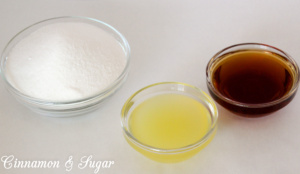 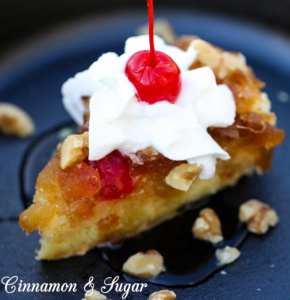 Warm a well-seasoned 9-inch cast iron skillet in the preheated oven for about 5 minutes. Don’t let it smoke.

Remove skillet from the oven and melt 1/2 cup butter in it, over low stovetop heat.

Remove from heat and sprinkle brown sugars evenly over the pan.

Sprinkle pineapple over the brown sugars, to cover bottom of the skillet.

Sift together the flour, baking powder, and salt. Set aside.

Gradually add the granulated sugar, beating well after each addition, then beat until medium-stiff peaks form.

In a small bowl, beat egg yolks at high speed until very thick and yellow, about 2 minutes.

Using a whisk, gently fold egg yolks and flour mixture into the egg whites until blended.

Bake until surface springs back when gently pressed with fingertip and a wooden skewer inserted into the center comes out clean, about 40 minutes.

Loosen the edges of the cake with table knife.

Cool the cake for 5 minutes before inverting onto serving plate.

Flip the skillet and leave a few minutes before removing. The cake will release easier this way.

Add all the ingredients to a saucepan and boil for 3 minutes.

While the sauce is hot, pour over cake and garnish with crushed walnuts, whipped cream, and Maraschino cherries. 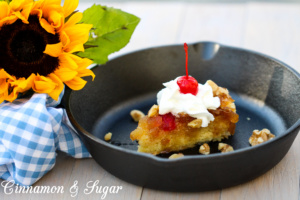 Separate the eggs while they are cold then allow them to come to room temperature while you collect the remaining ingredients. Cold eggs separate easier while room temperature eggs will whip up fluffier.

Make sure there is not even a speck of yolk in the whites and your bowl and beaters are grease-free or the egg whites won’t whip up fluffy.

The difference between light and dark brown sugar is simply the amount of molasses each contains. Dark brown sugar has a more assertive flavor but they can both be used interchangeably. 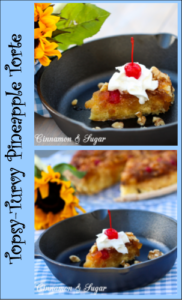